US Tech Hubs of tomorrow: Virginia and Wisconsin lead the race

San Diego, March 6th 2019 – When it comes to technology, San Francisco and New York dominate the job market. However, growth in these cities is slow and the competition increasingly high. With this in mind, Joblift has analyzed which smaller US cities and towns are set to become America’s tech hubs of tomorrow. By analyzing the top 50 locations in terms of the number of tech vacancies over the last 12 months, Joblift has ranked the top ten places, with under one million citizens, predicted to dominate the US’s tech scene in coming years. A point based system was implemented, taking into account the average increase in tech vacancies, the percentage tech jobs held compared to the entire job market, and the total number of tech jobs in every location. Extra points were also awarded to cities that have a university which was listed in the top 500 universities worldwide for Engineering and Technology degrees.

EDUCATION IS KEY:  80% OF THE TOPE 10 ARE HOME TO WORLD-RENOWED TECHNOLOGY UNIVERSITY

According to Joblift's findings, eight of the US's top ten future tech centers are home to world-class Engineering and Technology universities. Richmond, Virginia tops the list, where its 7,516 tech job vacancies made up 7% of the city's job market in the last 12 months. Plus, job ads have increased over 30% over the year. Las Vegas follows in the ranking, scoring the second position with close to 6,000 published job ads in 2018 and an average increase of 4% of those ads. Interestingly, Nevada is the only state to make the top 10 without a world-ranked university. Plano, Texas comes third with a count of 3,667 job ads published the past 12 months. Texas has three universities in the top 500 world’s best Engineering and Technology programs, including University of Texas at Austin in 44th position.

Plano (10%), Milwaukee (8%) and Madison (7%) are the three cities where tech jobs represent the biggest share compared to total vacancies. The presence of the two Wisconsin cities in this ranking makes a lot of sense considering the University of Wisconsin Madison is ranked 90th best Engineering and Technology programs. Madison stands out with a 10% increase of its tech job ads in 2018, following Richmond (+31%) and Virginia Beach (+11%), the two cities making Virginia one of the top states to watch out for. 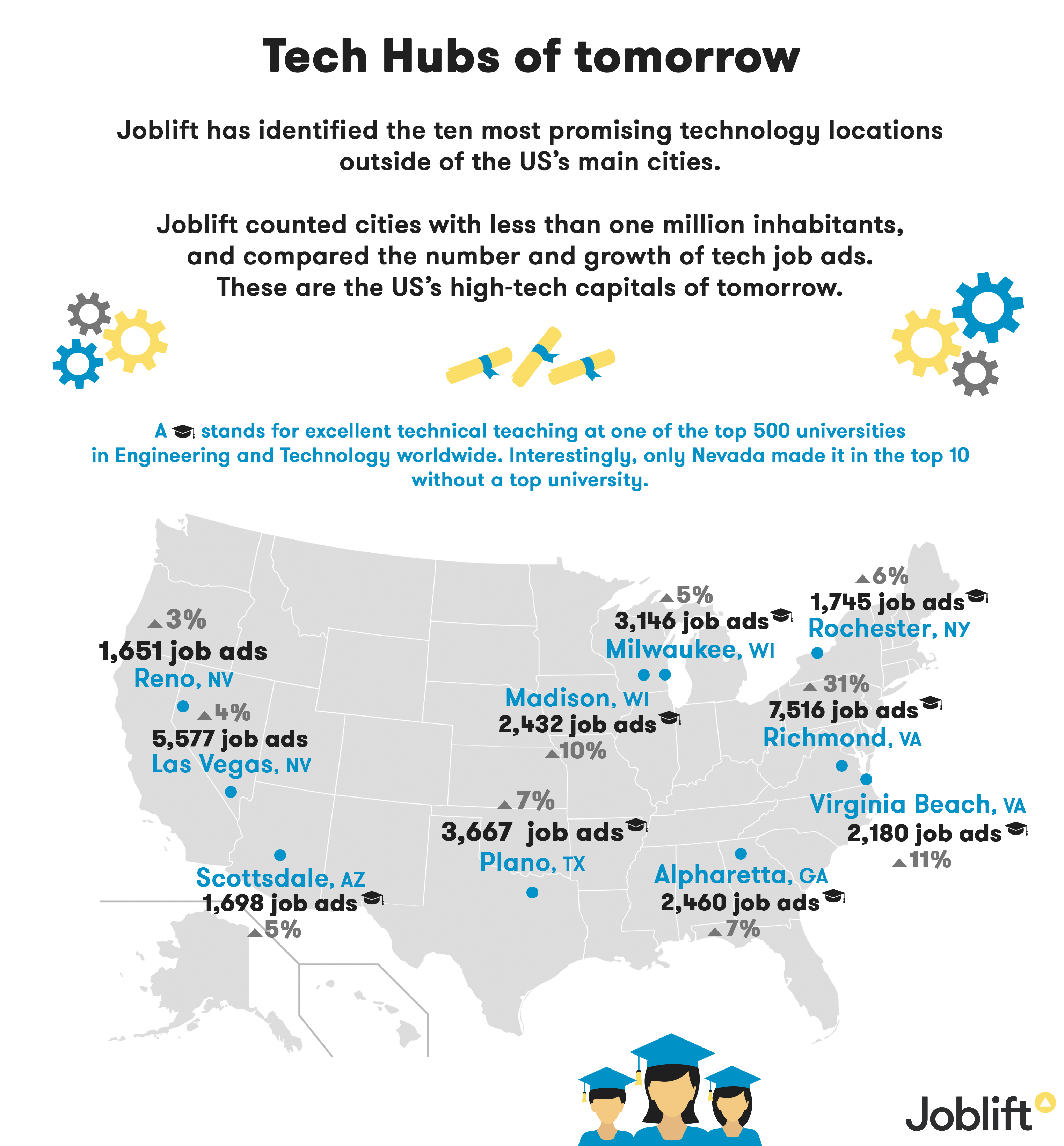